Private Screening of NED – The Movie 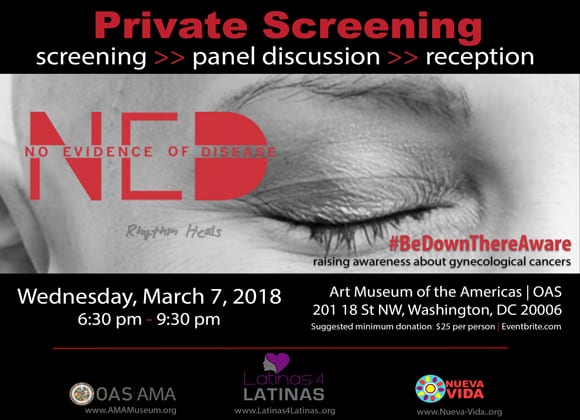 The main purpose of the private screening of NED – The Movie is to raise awareness of about gynecological cancers.  It is a documentary provide life-saving information, and a  movie that every single woman should watch. NED – No Evidence Of Disease  will change the way you ask questions to your OBGYN.  Tens of thousands of women are diagnosed every year with a GYN cancer. Nearly one in three will die. Every hour, approximately ten women are diagnosed with one of the five major below the belt cancers: cervical, ovarian, uterine (endometrial), vulvar and vaginal.

Survivors often say, ‘I didn’t know.’ What they didn’t know are the signs and symptoms of GYN cancers. That’s why Spark Media produced No Evidence of Disease.  It is time for every women to #BeDownThereAware.

On the eve of International Women’s Day, women and men will be able to watch, learn, and engage with a panel board of gynecological oncologists and cancer survivors in an enlightening Q&A, followed by a reception.

Details of the Private Screening of NED – The Movie

The idea is for women to attend together as a “girls’ night out” to promote a dialog among friends, but everyone is welcome.

Your admission tickets can be obtained online by clicking here: https://l4lscreeningned.eventbrite.com.  This is a educational fundraising event and your contribution to attend the screening is highly appreciated.

Six GYN cancer surgeons take on the Big C with Rock ‘n’ Roll. Their patients become the band’s most ardent fans. Below the belt cancers and a below the radar cause enter the spotlight. The result: NO EVIDENCE OF DISEASE, an intimate, humorous, and inspiring documentary from award-winning Spark Media Productions.

Take a moment learn more about our campaign Raising Funds for Medically Underserved Latin Women with Cancer in the DC Area through Nueva Vida and why we are doing this fundraiser.

In the event you cannot attend the event, but still want to contribute in some way, please consider making a donation by check payable to Latinas 4 Latinas and send it to the following address:

Or make the donation online here:

A percentage of the cash donations of this community event will go directly to Nueva Vida, community-based charity organization that helps Latino woman battling GYN cancer navigate them through the healthcare system, from diagnosis to treatment to post-treatment care.  Most of these women have no knowledge of the disease, and most importantly, have no means to pay for the adequate treatment.

Latinas 4 Latinas is honored to have the following local businesses and large corporations to be our sponsors in this event:

For sponsorship inquiries, please write to us at info@latinas4latinas.org.

Website: <a href="http://www.oas.org" target="_self" rel="external">View Venue Website</a>
CONNECT Silent Art Auction Fundraising & Benefit Cocktail PartyJLO Glow Makeup Workshop at Inglot Tysons Corner – May 8
We use cookies on our website to give you the most relevant experience by remembering your preferences and repeat visits. By clicking “Accept All”, you consent to the use of ALL the cookies. However, you may visit "Cookie Settings" to provide a controlled consent.
Cookie SettingsAccept All
Manage consent

This website uses cookies to improve your experience while you navigate through the website. Out of these, the cookies that are categorized as necessary are stored on your browser as they are essential for the working of basic functionalities of the website. We also use third-party cookies that help us analyze and understand how you use this website. These cookies will be stored in your browser only with your consent. You also have the option to opt-out of these cookies. But opting out of some of these cookies may affect your browsing experience.
Necessary Always Enabled
Necessary cookies are absolutely essential for the website to function properly. These cookies ensure basic functionalities and security features of the website, anonymously.
Functional
Functional cookies help to perform certain functionalities like sharing the content of the website on social media platforms, collect feedbacks, and other third-party features.
Performance
Performance cookies are used to understand and analyze the key performance indexes of the website which helps in delivering a better user experience for the visitors.
Analytics
Analytical cookies are used to understand how visitors interact with the website. These cookies help provide information on metrics the number of visitors, bounce rate, traffic source, etc.
Advertisement
Advertisement cookies are used to provide visitors with relevant ads and marketing campaigns. These cookies track visitors across websites and collect information to provide customized ads.
Others
Other uncategorized cookies are those that are being analyzed and have not been classified into a category as yet.
SAVE & ACCEPT